Establishing Fault in a Rear-End Collision

When a rear-end collision occurs the police will take driver’s statements, interview witnesses and visually inspect all vehicles involved. It has always been assumed the at-fault driver is the one driving the car who ran into the car in front, often referred to as the lead car, and in the majority of cases, this is true. Time honored basic traffic laws as well as the assured clear distance ahead doctrine (ACDA) state a driver must allow enough room between his vehicle and the one in front in order to be able to safely slow down or stop. It is also assumed even in the case of a sudden stop by the lead car if the rear vehicle doesn’t stop in time, then the driver wasn’t paying attention and is at-fault for not driving safely. But there are also situations where the lead car driver can be held either fully or partially accountable for the accident.

The first and most frequent exception is when the lead car has faulty or non-operational rear taillights. If the car in front has no way of signaling their intent to stop or slow down, then the tailing driver is generally not at fault for the rear-end collision. 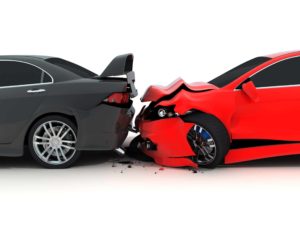 An event where the ACDA doctrine comes into play is when someone pulls into your lane of traffic from a side street or parking lot, or merges from the adjacent lane and doesn’t immediately accelerate to a sufficient speed causing you to crash into them. As long as you aren’t guilty of speeding, you may not be held liable.

If the driver of the lead car is driving erratically or recklessly and suddenly stops, causing you to rear-end them, or if their vehicle slows or stops due to mechanical failure then you may have a valid argument that you aren’t at fault or at least the lead driver should share in the blame. Of course, this all hinges on you observing all traffic laws and driving the speed limit.

Surprisingly frequent, and often difficult to prove, is when the lead driver has for some reason stopped, for example at a traffic signal, then puts his vehicle in reverse and neglects to shift back to drive before accelerating. Obviously, the fault is with the lead driver but unless there are witnesses to prove the tailing car was not moving at the time of the accident this may become a case of “he said/she said.”

Finally there is the rear-end collision caused by a chain reaction. In almost all cases, the driver of the final car is liable for damages to all parties involved. This is considered a residual collision, meaning the first and all remaining vehicles, except for the one the final car actually hit, were only involved because of that primary rear-end collision.

As you can see from this overview, both the chances of, and reasons for, being a party to a rear-end collision are vast. If you have been injured due to a rear-end accident or if you have been charged as the at-fault driver in this type of event, please reach out to Dan Pruitt today. Our experienced team of legal professionals and investigators will work diligently to determine exactly who was at fault, if shared liability is an option, and if the collision was caused by a manufacturers’ recall or defective part, there could be third party liability.