How Extraordinary Does an Injury Have to Be for Compensation?

If you are considering reaching out to a lawyer for help with a workers’ compensation claim, you may be wondering whether your injury is serious enough to qualify for compensation. When you think of a typical workers’ compensation claim, you might imagine a physical injury or some sort. Maybe you think of an employee slipping on a puddle of liquid on a floor, or a slipped disc resulting from lifting a box that was too heavy. What about injuries stemming from mental stress or trauma? Can an employer be responsible for mental trauma suffered on the job? 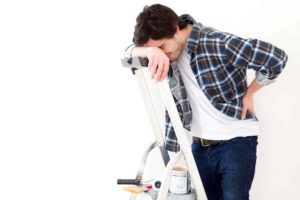 Workplace injuries can fall into many different categories. For example, Mr. Gregory Kochanowicz, one-time manager of a Morrisville, PA liquor store, was robbed at gunpoint in 2008. According to reports, Mr. Kochanowicz was prodded in the back with one of two guns used in the robbery, robbed, and secured to a chair with duct tape. At one point during the robbery, Mr. Kochanowicz had a gun placed to his head.

There were not any physical injuries suffered by Mr. Kochanowicz or the other employees present at the time of the robbery, but he contends that since that day he has suffered an abundance of mental injuries including depression, anxiety, and flashbacks, and asserts that these injuries prevented him from going back to work. Mr. Kochanowicz filed for workers’ compensation, claiming that being robbed at gunpoint and tied to a chair were not duties in the course and scope of his job.   His claim was challenged by his employer, the Pennsylvania Liquor Control Board (PLCB).

The PLCB did not dispute the chain of events suffered by Mr. Kochanowicz. Rather, they argued that under the law, his injuries were not abnormal considering his line of work. What followed was four years of legal dispute with each side arguing for different interpretations of the Pens statute. Most recently, in December of 2014, the Commonwealth Court in PA agreed that Mr. Kochanowicz is due the requested $727.00 per week under the provisions of the Pennsylvania Workers’ Compensation Act. It remains to be seen whether the PLCB will appeal this decision.

Under Title 42 of the South Carolina Code of Laws, an injury can be a disease, stress, mental injury, or other physical ailment directly linked to work done on the job. How the Workers’ Compensation Commission will interpret each of these classifications is complicated.

Have You Suffered an Injury?

If you have suffered an injury on the job, reach out to our offices today. If you are unsure of whether your injury would qualify for a workers’ compensation claim, it may be better to err on the side of caution. Reach out today for a consultation, and let the team at the Dan Pruitt Law Firm get to work on securing the results you deserve.