A Felony DUI Can Change and End a Life

South Carolina Highway Patrol charged a man with two counts of felony DUI after an accident that resulted in the deaths of 2 people, and injured four others in a five-car wreck off U.S. Highway 79. Most people are aware that driving under the influence of a substance such as drugs or alcohol is a crime, but it is also important to know that a DUI that results in great bodily harm—or deaths as it did in this case—raises the legal stakes for everyone involved, and may result in incarceration for the driver. 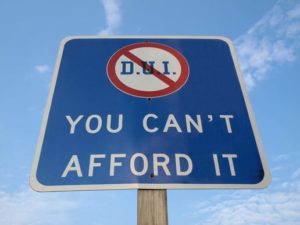 What is a Felony DUI and What Are the Consequences?

Under Section 56-5-2945 of South Carolina’s Title 56 Uniform Act Regulating Traffic on Highways, if a driver who is under the influence of an intoxicating substance such as drugs and alcohol is on the road and commits an illegal act, or is neglectful by virtue of driving while intoxicated, or causes great bodily injury or death to someone else, then the driver is charged with felony driving under the influence. The law defines “great bodily injury” as a physical injury that creates a significant risk of death or an injury that causes a serious disability, impairment or disfigurement of a body part or an organ. For instance, a car accident that results in another motorist losing an arm or a leg or to go blind from a projectile object will be considered great bodily injury, but a minor scrape or bruising would not count.

The injuries or deaths do not have to occur at the scene for the felony DUI charge, but the DUI has to be the proximate cause. For instance, one victim killed in the accident died at the scene while his wife, the other victim, later died in the hospital from blunt force trauma as a result of the accident; thus, the defendant is charged with their deaths. The defendant will also be held accountable for the injuries of the other motorists, including if their condition turns for the worse and they die from their injuries.

In addition, a driver who is either convicted or pleads guilty to a felony DUI charge will have his or her license suspended by the Department of Motor Vehicles. If the felony DUI incident resulted in great bodily injury then the license is suspended for three years, and a five-year suspension will result if it resulted in death. A felony DUI has life-changing consequences for all motorists, their friends and their families. If you have been charged with a felony DUI, it would be wise to consult with an experienced traffic attorney.